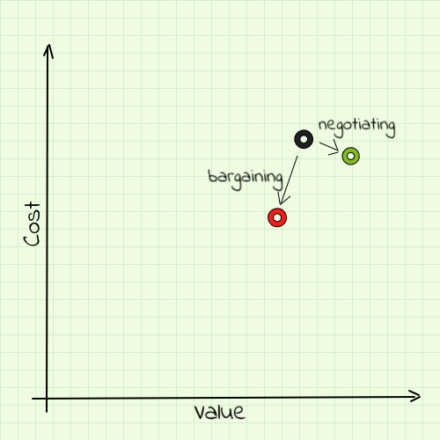 I recently oversaw a meeting to finalise a contract between two parties. The supplier put the deliverables on table and the client then started “bargaining”. Err… haggling was more like it. What you want was already on table. The buyer knew he had an upper hand, as he realised the supplier was desperate for business in a slowing down environment. The deliverables were non-negotiable and the discussions were only on costs. It was a competitive win-lose.

Now one of three things will happen when the contract has to be renewed next. Either the supplier knowing the nature of the bargainer will quote a buffered price for the buyer to haggling. Or, the supplier will start eliminating resources and/or deliverables from the scope of work given the costs. Both mean the trust factor is broken between the supplier and client and one of them is always getting a raw deal. Worst still, if there are no fixed costs already incurred, the supplier may just walk off the table realising that the deal doesn’t make business sense anymore.

Negotiation on the other hand is built on trust and openness between the parties if the right questions are asked. The buyer can get a few freebies which won’t cost the supplier much but can be of tremendous value.

In the best negotiations, both sides of the table walks away feeling they made a good deal. A cooperative win-win. It keeps the relationships open for future business.

This site uses Akismet to reduce spam. Learn how your comment data is processed.